This three-volume Omnibus e-Book set is a collection of Earl J. Hess's definitive works on trench warfare during the Civil War. The set includes:

Field Armies and Fortifications in the Civil War: The Eastern Campaigns, 1861-1864, covering the eastern campaigns, from Big Bethel and the Peninsula to Chancellorsville, Gettysburg, Charleston, and Mine Run;

In the Trenches at Petersburg: Field Fortifications and Confederate Defeat, recounting the strategic and tactical operations in Virginia during the last ten months of the Civil War, when field fortifications dominated military planning and the landscape of battle.

This invaluable trilogy is a must have for anyone interested in the battles, tactics and strategies of both sides during the Civil War. 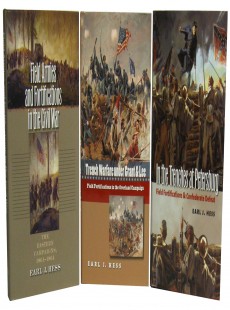 Includes Field Armies and Fortifications in the Civil War; Trench Warfare Under Grant and Lee; and In the Trenches at Petersburg