For 4 million slaves, emancipation was a liberation and resurrection story of biblical proportion, both the clearest example of God's intervention in human history and a sign of the end of days. In this book, Matthew Harper demonstrates how black southerners' theology, in particular their understanding of the end times, influenced nearly every major economic and political decision they made in the aftermath of emancipation. From considering what demands to make in early Reconstruction to deciding whether or not to migrate west, African American Protestants consistently inserted themselves into biblical narratives as a way of seeing the importance of their own struggle in God's greater plan for humanity. Phrases like "jubilee," "Zion," "valley of dry bones," and the "New Jerusalem" in black-authored political documents invoked different stories from the Bible to argue for different political strategies.

This study offers new ways of understanding the intersections between black political and religious thought of this era. Until now, scholarship on black religion has not highlighted how pervasive or contested these beliefs were. This narrative, however, tracks how these ideas governed particular political moments as African Americans sought to define and defend their freedom in the forty years following emancipation. 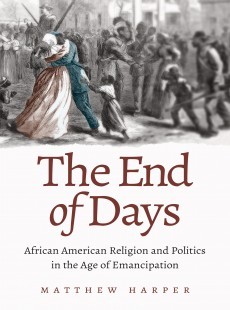 The End of Days

African American Religion and Politics in the Age of Emancipation