In The Experience of a Slave in South Carolina, escaped slave John Andrew Jackson seeks to educate his readers on the horrors of slavery. He spares no details in relating the murder of his sister, the separation of his family, and his own frequent whippings at the hands of a "Christian" master and mistress. He offers a scathing review of white religious hypocrisy, criticizing those who could not see the contradiction between worshiping a merciful God on Sundays and holding slaves under inhumane conditions. Jackson details his escape from slavery into Massachusetts as a ship stowaway after he is separated by sale from his first wife and child. He also describes his interactions with Harriet Beecher Stowe; his failed attempts to purchase the freedom of his family members; and his eventual escape into Canada following the passage of the Fugitive Slave Law. His work also includes a variety of carefully recorded hymns and antislavery songs. Jackson would eventually flee to England with his second wife before returning to South Carolina after the War. 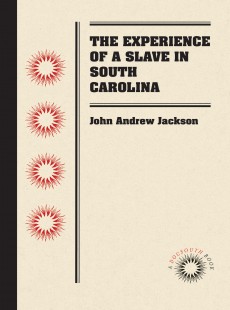 The Experience of a Slave in South Carolina