Originally published in order to raise money to purchase his son's freedom, Thomas Jones's autobiography first appeared in the 1850s. This version, published in 1885, includes not only Jones's account of his childhood and young adult life as a slave in North Carolina, but also a long additional section in which Jones describes his experiences as a minister in North Carolina, while still enslaved, and then on the abolitionist lecture circuit in Massachusetts and the Maritime Provinces of Canada after he stowed away on a ship bound for New York in 1849. The narrative's most prominent focus is on Jones's ministry in and around Wilmington, North Carolina, before he escaped. The narrative puts a characteristically postbellum emphasis on shared religious devotion and even fondness between African Americans and whites. Perhaps the most compelling scene, however, is Jones's account of his forcible separation from his first wife and their three children, whom he never saw again. 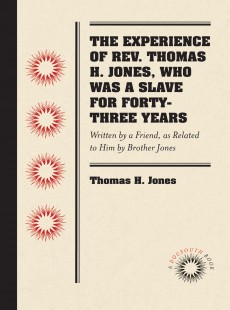 The Experience of Rev. Thomas H. Jones, Who Was a Slave for Forty-Three Years

Written by a Friend, as Related to Him by Brother Jones