In The First American Frontier, Wilma Dunaway challenges many assumptions about the development of preindustrial Southern Appalachia's society and economy. Drawing on data from 215 counties in nine states from 1700 to 1860, she argues that capitalist exchange and production came to the region much earlier than has been previously thought. Her innovative book is the first regional history of antebellum Southern Appalachia and the first study to apply world-systems theory to the development of the American frontier. Dunaway demonstrates that Europeans established significant trade relations with Native Americans in the southern mountains and thereby incorporated the region into the world economy as early as the seventeenth century. In addition to the much-studied fur trade, she explores various other forces of change, including government policy, absentee speculation in the region's natural resources, the emergence of towns, and the influence of local elites. Contrary to the myth of a homogeneous society composed mainly of subsistence homesteaders, Dunaway finds that many Appalachian landowners generated market surpluses by exploiting a large landless labor force, including slaves. In delineating these complexities of economy and labor in the region, Dunaway provides a perceptive critique of Appalachian exceptionalism and development. 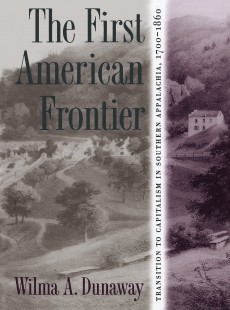 Transition to Capitalism in Southern Appalachia, 1700-1860