It may be difficult to imagine that a consequential back electoral politics evolved in the United States before the Civil War, for as of 1860, the overwhelming majority of African Americans remained in bondage. Yet free black men, many of them escaped slaves, steadily increased their influence in electoral politics over the course of the early American republic. Despite efforts to disfranchise them, black men voted across much of the North, sometimes in numbers sufficient to swing elections. In this meticulously-researched book, Van Gosse offers a sweeping reappraisal of the formative era of American democracy from the Constitution's ratification through Abraham Lincoln's election, chronicling the rise of an organized, visible black politics focused on the quest for citizenship, the vote, and power within the free states.

Full of untold stories and thorough examinations of political battles, this book traces a First Reconstruction of black political activism following emancipation in the North. From Portland, Maine and New Bedford, Massachusetts to Brooklyn and Cleveland, black men operated as voting blocs, denouncing the notion that skin color could define citizenship. 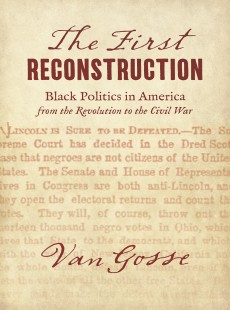 Black Politics in America from the Revolution to the Civil War