It is well this is so terrible! We should grow too fond of it," said General Robert E. Lee as he watched his troops repulse the Union attack at Fredericksburg on 13 December 1863.

This collection of seven original essays by leading Civil War historians reinterprets the bloody Fredericksburg campaign and places it within a broader social and political context. By analyzing the battle's antecedents as well as its aftermath, the contributors challenge some long-held assumptions about the engagement and clarify our picture of the war as a whole.

The book begins with revisionist assessments of the leadership of Ambrose Burnside and Robert E. Lee and a portrait of the conduct and attitudes of one group of northern troops who participated in the failed assaults at Marye's Heights. Subsequent essays examine how both armies reacted to the battle and how the northern and southern homefronts responded to news of the carnage at Frederickburg. A final chapter explores the impact of the battle on the residents of the Fredericksburg area and assesses changing Union attitudes about the treatment of Confederate civilians. 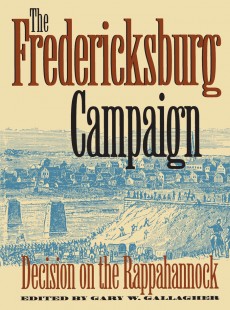 Decision on the Rappahannock