The rapid rise in popularity of maps and geography handbooks in the eighteenth century ushered in a new geographic literacy among nonelite Americans. In a pathbreaking and richly illustrated examination of this transformation, Martin Brückner argues that geographic literacy as it was played out in popular literary genres--written, for example, by William Byrd, George Washington, Thomas Jefferson, Royall Tyler, Charles Brockden Brown, Meriwether Lewis, and William Clark--significantly influenced the formation of identity in America from the 1680s to the 1820s.

Drawing on historical geography, cartography, literary history, and material culture, Brückner recovers a vibrant culture of geography consisting of property plats and surveying manuals, decorative wall maps and school geographies, the nation's first atlases, and sentimental objects such as needlework samplers. By showing how this geographic revolution affected the production of literature, Brückner demonstrates that the internalization of geography as a kind of language helped shape the literary construction of the modern American subject. Empirically rich and provocative in its readings, The Geographic Revolution in Early America proposes a new, geographical basis for Anglo-Americans' understanding of their character and its expression in pedagogical and literary terms. 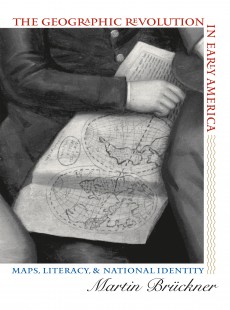