In The Grand Old Man of Baseball, Norman L. Macht chronicles Connie Mack's tumultuous final two decades in baseball. After Mack had built one of baseball's greatest teams, the 1929–31 Philadelphia Athletics, the Depression that followed the stock market crash fundamentally reshaped Mack's legacy as his team struggled on the field and at the gate. Among the challenges Mack faced: a sharp drop in attendance that forced him to sell his star players; the rise of the farm system, which he was slow to adopt; the opposition of other owners to night games, which he favored; the postwar integration of baseball, which he initially opposed; a split between the team's heirs (Mack's sons Roy and Earle on one side, their half brother Connie Jr. on the other) that tore apart the family and forced Mack to choose—unwisely—between them; and, finally, the disastrous 1951–54 seasons in which Roy and Earle ran the club to the brink of bankruptcy.   By now aged and mentally infirm, Mack watched in bewilderment as the business he had built fell apart. Broke and in debt, Roy and Earle feuded over the sale of the team. In a never-before-revealed series of maneuvers, Roy double-crossed his father and brother and the team was sold and moved to Kansas City in 1954.   In Macht's third volume of his trilogy on Mack, he describes the physical, mental, and financial decline of Mack's final years, which unfortunately became a classic American tragedy. 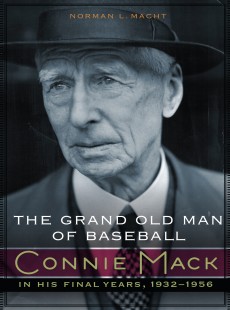 The Grand Old Man of Baseball