Many authors have traveled and explored the out-of-doors, both in life and then in their books, proving themselves stalwart, audacious, even heroic; Andrew Farkas is not among them. He is brave enough to admit that the outdoors isn't for him. Instead, in these essays Farkas reports on his bold explorations of a very different territory: the in-of-doors, the waiting rooms, kitchens, malls, bars, theaters, roadside motel rooms, and other places that feature temperature control, protection from rampaging predators, and a higher degree of comfort than can be found outside. Farkas discovers that, just as the mannered and wonderfully (gloriously) artificial indoors influences us greatly, our lives are also controlled much more by fiction than by anything "real." So come in out of the weather (it's always terrible) and join the Great Indoorsman on his adventures, where he makes fun of pretty much everything, most of all himself. 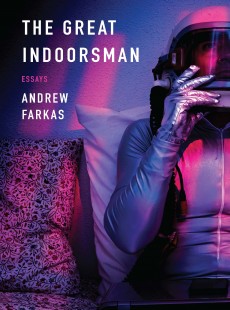