A southern Renaissance man, Eugene Walter (1921-1998) was a pioneering food writer, a champion of southern foodways and culture, and a legendary personality among food lovers. The Happy Table of Eugene Walter, which introduces a new generation of readers to Walter's culinary legacy, is a revelation to anyone interested in today's booming scene in vintage and artisanal drinks--from bourbon and juleps to champagne and punch--and a southern twist on America's culinary heritage.

Assembled and edited by Walter's literary executor, Donald Goodman, and food writer Thomas Head, this charming cookbook includes more than 300 recipes featuring the use of spirits in the food and drink of the South, as well as numerous asides, lovely short essays, and countless witticisms that make for great reading as well as good cooking. A wellspring of southern eating and drinking traditions lovingly collected by Walter over the years, the volume is also a celebration of Walter himself and his incomparable appetite and talent for life and its surprising pleasures. The Happy Table showcases Walter's remarkably contemporary gustatory sensibilities and the humorous and quirky yet incisive voice for which he has long been embraced. 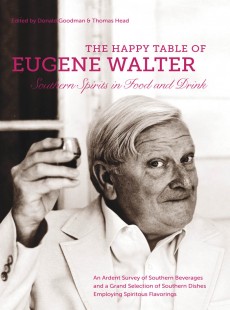 The Happy Table of Eugene Walter

Southern Spirits in Food and Drink