Available for the first time as an Omnibus Ebook edition, this three-volume set is the acclaimed full account of the three days at Gettysburg, by the noted historian Harry Pfanz.

For good reason, the second and third days of the Battle of Gettysburg have received the lion's share of attention from historians. With this book, however, the critical first day's fighting finally receives its due. After sketching the background of the Gettysburg campaign and recounting the events immediately preceding the battle, Harry Pfanz offers a detailed tactical description of events of the first day. He describes the engagements in McPherson Woods, at the Railroad Cuts, on Oak Ridge, on Seminary Ridge, and at Blocher's Knoll, as well as the retreat of Union forces through Gettysburg and the Federal rally on Cemetery Hill. Throughout, he draws on deep research in published and archival sources to challenge many long-held assumptions about the battle.

Gettysburg--The Second Day is certain to become a Civil War classic. What makes the work so authoritative is Pfanz' mastery of the Gettysburg literature and his unparalleled knowledge of the ground on which the fighting occurred. His sources include the Official Records, regimental histories and personal reminiscences from soldiers North and South, personal papers and diaries, newspaper files, and last -- but assuredly not least -- the Gettysburg battlefield. Pfanz's career in the National Park Service included a ten-year assignment as a park historian at Gettysburg. Without doubt, he knows the terrain of the battle as well as he knows the battle itself.

Harry Pfanz provides the first definitive account of the fighting between the Army of the Potomac and Robert E. Lee's Army of Northern Virginia at Cemetery Hill and Culp's Hill--two of the most critical engagements fought at Gettysburg on 2 and 3 July 1863. Pfanz provides detailed tactical accounts of each stage of the contest and explores the interactions between--and decisions made by--generals on both sides. In particular, he illuminates Confederate lieutenant general Richard S. Ewell's controversial decision not to attack Cemetery Hill after the initial southern victory on 1 July. Pfanz also explores other salient features of the fighting, including the Confederate occupation of the town of Gettysburg, the skirmishing in the south end of town and in front of the hills, the use of breastworks on Culp's Hill, and the small but decisive fight between Union cavalry and the Stonewall Brigade. 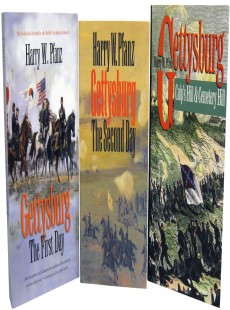