On Tuesday, November 17, 1942, aircraft CNAC No. 60 climbed slowly toward the Himalayas, growing smaller and smaller until it finally faded from sight, never to be seen again—until seventy years later. This is the story of one family's search for answers about the aircraft and its crew, particularly the co-pilot, James S. Browne. Browne was a pilot for China National Aviation Corporation (CNAC), an airline jointly owned by the Republic of China and Pan American World Airways and flown under contract with the U.S. Army Air Corps. CNAC's mission was to pioneer and fly the dangerous Hump routes over the Himalayas to deliver gasoline, weapons, ammunition, and war goods. These supplies were desperately needed to keep China in the war, for if China left the war, more than one million Japanese troops would be free to control the Pacific. Browne and his crew were killed in a plane crash while en route to Dinjan Airfield in India for supplies. Rescue missions following their disappearance were unsuccessful. Nearly forty years later, Robert L. Willett picks up where the search left off, hoping to find Browne, his missing cousin. After gathering crash-site information on a trip to China, Willett sends a search team on three ascents up Cang Shan Mountain near Dali, China, and finally strikes metal—the scattered wreckage of Browne's C-47. From the very beginning of the discovery eight years ago, Willett's efforts to excavate the site and bring Jimmie Browne home have encountered bureaucratic roadblocks with U.S. government agencies and the Chinese government. His search-and-recover mission continues even today. 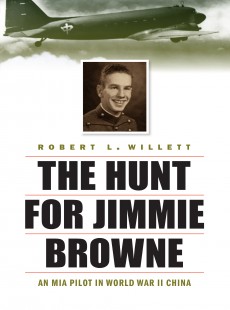 The Hunt for Jimmie Browne