Sweetwater County lies in southwestern Wyoming, and has stood as a significant symbolic geography for the "new Western Woman's" history. As the county in which Elinore Pruitt Stewart (Letters of a Woman Homesteader, Nebraska 1990) said she proved up her homestead in 1913, it is a fitting locale for the study of western gender relations. The Important Things of Life examines women's work and family lives in Sweetwater County in the late nineteenth and early twentieth centuries. The 1880's discovery of coal caused a population boom, attracting immigrants from numerous ethnic groups. At the same time, liberalized homestead law drew sheep and cattle ranchers. Dee Garceau demonstrates how survival on the ranching and mining frontier heightened the value of group cooperation in ways that bred conservative attitudes toward gender. Augmented by reminiscences and oral histories, Garceau traces the adaptations that broadened women's work roles and increased their domestic authority. Hers is a compelling portrait of the American West as a laboratory of gender role change, in which migration, relocation, and new settlement underscored the development of new social identities. 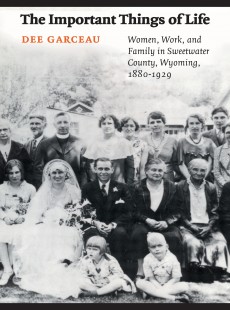 The Important Things of Life