By the 1920s, the sectional reconciliation that had seemed achievable after Reconstruction was foundering, and the South was increasingly perceived and portrayed as impoverished, uneducated, and backward. In this interdisciplinary study, Angie Maxwell examines and connects three key twentieth-century moments in which the South was exposed to intense public criticism, identifying in white southerners' responses a pattern of defensiveness that shaped the region's political and cultural conservatism.

Maxwell exposes the way the perception of regional inferiority confronted all types of southerners, focusing on the 1925 Scopes trial in Dayton, Tennessee, and the birth of the anti-evolution movement; the publication of I'll Take My Stand and the turn to New Criticism by the Southern Agrarians; and Virginia's campaign of Massive Resistance and Interposition in response to the Brown v. Board of Education decision. Tracing the effects of media scrutiny and the ridicule that characterized national discourse in each of these cases, Maxwell reveals the reactionary responses that linked modern southern whiteness with anti-elitism, states' rights, fundamentalism, and majoritarianism. 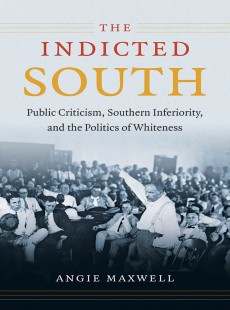 Public Criticism, Southern Inferiority, and the Politics of Whiteness