In 1967, Reies Lopez Tijerina led an armed takeover of a New Mexico courthouse in the name of land rights for disenfranchised Spanish-speaking locals. The small-scale raid surprisingly thrust Tijerina and his cause into the national spotlight, catalyzing an entire generation of activists. The actions of Tijerina and his group, the Alianza Federal de Mercedes (the Federal Alliance of Land Grants), demanded that Americans attend to an overlooked part of the country's history: the United States was an aggressive empire that had conquered and colonized the Southwest and subsequently wrenched land away from border people—Mexicans and Native Americans alike. To many young Mexican American activists at the time, Tijerina and the Alianza offered a compelling and militant alternative to the nonviolence of Cesar Chavez and Martin Luther King Jr. Tijerina's place at the table among the nation's leading civil rights activists was short-lived, but his analysis of land dispossession and his prophetic zeal for the rights of his people was essential to the creation of the Chicano movement.

This fascinating full biography of Tijerina (1926–2015) offers a fresh and unvarnished look at one of the most controversial, criticized, and misunderstood activists of the civil rights era. Basing her work on painstaking archival research and new interviews with key participants in Tijerina's life and career, Lorena Oropeza traces the origins of Tijerina's revelatory historical analysis to the years he spent as a Pentecostal preacher and his hidden past as a self-proclaimed prophet of God. Confronting allegations of anti-Semitism and accusations of sexual abuse, as well as evidence of extreme religiosity and possible mental illness, Oropeza's narrative captures the life of a man--alternately mesmerizing and repellant--who changed our understanding of the American West and the place of Latinos in the fabric of American struggles for equality and self-determination. 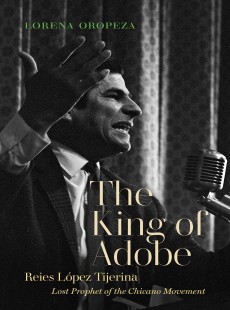 The King of Adobe