The coasts of today's American South feature luxury condominiums, resorts, and gated communities, yet just a century ago, a surprising amount of beachfront property in the Chesapeake, along the Carolina shores, and around the Gulf of Mexico was owned and populated by African Americans. Blending social and environmental history, Andrew W. Kahrl tells the story of African American–owned beaches in the twentieth century. By reconstructing African American life along the coast, Kahrl demonstrates just how important these properties were for African American communities and leisure, as well as for economic empowerment, especially during the era of the Jim Crow South. However, in the wake of the civil rights movement and amid the growing prosperity of the Sunbelt, many African Americans fell victim to effective campaigns to dispossess black landowners of their properties and beaches.

Kahrl makes a signal contribution to our understanding of African American landowners and real-estate developers, as well as the development of coastal capitalism along the southern seaboard, tying the creation of overdeveloped, unsustainable coastlines to the unmaking of black communities and cultures along the shore. The result is a skillful appraisal of the ambiguous legacy of racial progress in the Sunbelt. 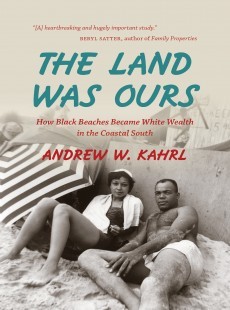 The Land Was Ours

How Black Beaches Became White Wealth in the Coastal South