Mexico’s Reforma, the mid-nineteenth-century liberal revolution, decisively shaped the country by disestablishing the Catholic Church, secularizing public affairs, and laying the foundations of a truly national economy and culture.     The Lawyer of the Church is an examination of the Mexican clergy’s response to the Reforma through a study of the life and works of Bishop Clemente de Jesús Munguía (1810–68), one of the most influential yet least-known figures of the period. By analyzing how Munguía responded to changing political and intellectual scenarios in defense of the clergy’s legal prerogatives and social role, Pablo Mijangos y González argues that the Catholic Church opposed the liberal revolution not because of its supposed attachment to a bygone past but rather because of its efforts to supersede colonial tradition and refashion itself within a liberal yet confessional state. With an eye on the international influences and dimensions of the Mexican church-state conflict, The Lawyer of the Church also explores how Mexican bishops gradually tightened their relationship with the Holy See and simultaneously managed to incorporate the papacy into their local affairs, thus paving the way for the eventual “Romanization” of Mexican Catholicism during the later decades of the century. 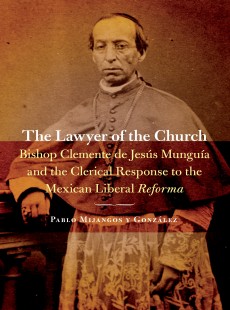 The Lawyer of the Church