Apollo 15 command module pilot Al Worden was one of the highest-profile personalities among the Apollo astronauts, renowned for his outspokenness and potent views but also recognized as a warm and well-liked person who devoted much of his life after retiring from NASA to sharing his spaceflight experiences. Worden had nearly finished writing this book before his passing in 2020 at the age of eighty-eight. Coauthored with spaceflight historian Francis French, The Light of Earth is Worden's wide-ranging look at the greatest-ever scientific undertaking, in which he was privileged to be a leading participant. Here Worden gives readers his refreshingly candid opinions on the space program, flying to the moon, and the people involved in the Apollo and later shuttle programs, as well as sharing hard-hitting reflections on the space shuttle program, the agonies and extraordinary sights and delights of being a NASA Apollo astronaut, and the space program's triumphs and failures. Worden delves into areas of personal grief that reveal the noble and truly human side of the space program's earliest years. He does not hold back when discussing the shocking deaths of his fellow astronauts in the three major tragedies that struck the space agency, nor does he shy away from sharing his personal feelings about fellow Apollo astronauts including Neil Armstrong and Buzz Aldrin. Worden was known as a charismatic speaker and one of the most thoughtful Apollo astronauts. His candid, entertaining, and unique perspective in The Light of Earth will captivate and surprise. 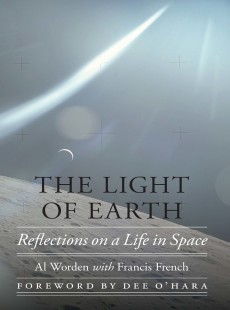 The Light of Earth

Reflections on a Life in Space