The story of modern politics in North Carolina is very much one of American democracy, with all its grand ambitions, limitations, and pitfalls. So argues Tom Eamon in his probing narrative of the state's political path since the 1940s. He charts the state's political transformation into a modern democratic society to show that this change was more than an evolution--it was a revolution, one that largely came about through political means, driven by strong movements and individuals working for change.
By tracking the turbulence of politics throughout the period, from racial tensions to student demonstrations to fierce rivalries in the higher education arena, Eamon explores how conflict helped build a better society even as the state continued to lag in many areas. This rich account opens to readers the unforgettable people and hard-fought elections that have shaped North Carolina's competitive personality and have led to the state's emergence as a major player in twenty-first-century American politics. 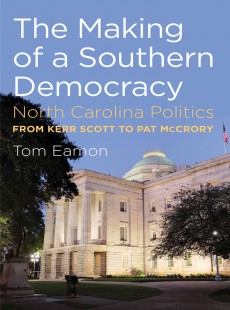 The Making of a Southern Democracy