The proliferation of book clubs, reading groups, "outline" volumes, and new forms of book reviewing in the first half of the twentieth century influenced the tastes and pastimes of millions of Americans. Joan Rubin here provides the first comprehensive analysis of this phenomenon, the rise of American middlebrow culture, and the values encompassed by it.
Rubin centers her discussion on five important expressions of the middlebrow: the founding of the Book-of-the-Month Club; the beginnings of "great books" programs; the creation of the New York Herald Tribune's book-review section; the popularity of such works as Will Durant's The Story of Philosophy; and the emergence of literary radio programs. She also investigates the lives and expectations of the individuals who shaped these middlebrow institutions--such figures as Stuart Pratt Sherman, Irita Van Doren, Henry Seidel Canby, Dorothy Canfield Fisher, John Erskine, William Lyon Phelps, Alexander Woollcott, and Clifton Fadiman.
Moreover, as she pursues the significance of these cultural intermediaries who connected elites and the masses by interpreting ideas to the public, Rubin forces a reconsideration of the boundary between high culture and popular sensibility. 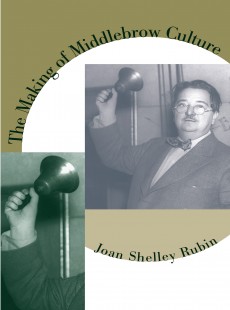 The Making of Middlebrow Culture