The arrival of several hundred Guatemalan-born workers in a Morganton, North Carolina, poultry plant sets the stage for this dramatic story of human struggle in an age of globalization. When laborers' concerns about safety and fairness spark a strike and, ultimately, a unionizing campaign at Case Farms, the resulting decade-long standoff pits a recalcitrant New South employer against an unlikely coalition of antagonists. Mayan refugees from war-torn Guatemala, Mexican workers, and a diverse group of local allies join forces with the Laborers union. The ensuing clash becomes a testing ground for "new labor" workplace and legal strategies. In the process, the nation's fastest-growing immigrant region encounters a new struggle for social justice.

Using scores of interviews, Leon Fink gives voice to a remarkably resilient people. He shows that, paradoxically, what sustains these global travelers are the ties of local community. Whether one is finding a job, going to church, joining a soccer team, or building a union, kin and linguistic connections to the place of one's birth prove crucial in negotiating today's global marketplace.

A story set at the intersection of globalization and community, two words not often linked, The Maya of Morganton addresses fundamental questions about the changing face of labor in the United States. 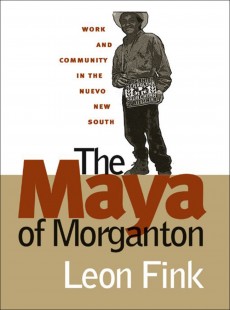 The Maya of Morganton

Work and Community in the Nuevo New South