Union general John Pope was among the most controversial and
misunderstood figures to hold major command during the Civil War.
Before being called east in June 1862 to lead the Army of Virginia against General Robert E. Lee, he compiled an enviable record in Missouri and as commander of the Army of the Mississippi. After his ignominious defeat at the Second Battle of Bull Run, he was sent to the frontier. Over the next twenty-four years Pope held important department commands on the western plains and was recognized as one of the army's leading authorities on Indian affairs, but he never again commanded troops in battle.
In 1886, Pope was engaged by the National Tribune, a
weekly newspaper published in Washington, D.C., to write a series
of articles on his wartime experiences. Over the next five years, in twenty-nine installments, he wrote about the war as he had lived it. Collected here for the first time, Pope's "war reminiscences" join a select roster of memoirs written by Civil War army commanders.
Pope presents a detailed review of the campaigns in which he
participated and offers vivid character sketches of such illustrious figures as Abraham Lincoln and Secretary of War Edwin M. Stanton. Clearly written and balanced in tone, his memoirs are a dramatic and important addition to the literature on the Civil War. 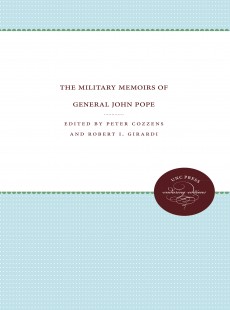