In the century preceding World War I, the American Middle West drew thousands of migrants both from Europe and from the northeastern United States. In the American mind, the region represented a place where social differences could be muted and a distinctly American culture created. Many of the European groups, however, viewed the Midwest as an area of opportunity because it allowed them to retain cultural and religious traditions from their homelands.
Jon Gjerde examines the cultural patterns, or "minds," that those settling the Middle West carried with them. He argues that such cultural transplantation could occur because patterns of migration tended to reunite people of similar pasts and because the rural Midwest was a vast region where cultural groups could sequester themselves in tight-knit settlements built around familial and community institutions.
Gjerde compares patterns of development and acculturation across immigrant groups, exploring the frictions and fissures experienced within and between communities. Finally, he examines the means by which individual ethnic groups built themselves a representative voice, joining the political and social debate on both a regional and national level. 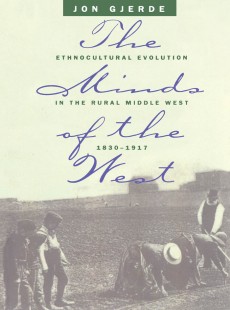 The Minds of the West