The 1954 Brown v. Board of Education decision required desegregation of America's schools, but it also set in motion an agonizing multidecade debate over race, class, and IQ. In this innovative book, Michael E. Staub investigates neuropsychological studies published between Brown and the controversial 1994 book The Bell Curve. In doing so, he illuminates how we came to view race and intelligence today.

In tracing how research and experiments around such concepts as learned helplessness, deferred gratification, hyperactivity, and emotional intelligence migrated into popular culture and government policy, Staub reveals long-standing and widespread dissatisfaction—not least among middle-class whites—with the metric of IQ. He also documents the devastating consequences—above all for disadvantaged children of color—as efforts to undo discrimination and create enriched learning environments were recurrently repudiated and defunded. By connecting psychology, race, and public policy in a single narrative, Staub charts the paradoxes that have emerged and that continue to structure investigations of racism even into the era of contemporary neuroscientific research. 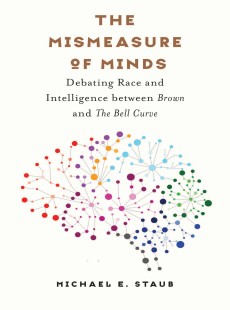 The Mismeasure of Minds

Debating Race and Intelligence between Brown and The Bell Curve