The stunning Confederate victory at Chancellorsville came at an enormous cost: an estimated 13,000 Confederate casualties. The most prominent, of course, was Stonewall Jackson, who was wounded by friendly fire and died several days later, on 10 May 1863. This Civil War Short presents Robert K. Krick's authoritative investigation into the incident that resulted in Jackson's death. This work was originally published as "The Smoothbore Volley That Doomed the Confederacy" in Chancellorsville: The Battle and Its Aftermath, edited by Gary Gallagher, which places the Chancellorsville campaign in a broad context and demonstrates how its significance reverberated beyond the battlefield. 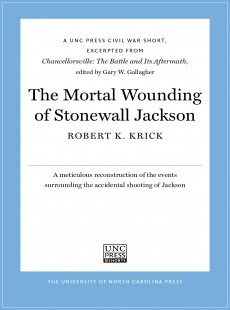 The Mortal Wounding of Stonewall Jackson

A UNC Press Civil War Short, Excerpted from Chancellorsville: The Battle and Its Aftermath, edited by Gary W. Gallagher