Volume 11 of The New Encyclopedia of Southern Culture examines the economic culture of the South by pairing two categories that account for the ways many southerners have made their living. In the antebellum period, the wealth of southern whites came largely from agriculture that relied on the forced labor of enslaved blacks. After Reconstruction, the South became attractive to new industries lured by the region's ongoing commitment to low-wage labor and management-friendly economic policies. Throughout the volume, articles reflect the breadth and variety of southern life, paying particular attention to the region's profound economic transformation in recent decades.

The agricultural section consists of 25 thematic entries that explore issues such as Native American agricultural practices, plantations, and sustainable agriculture. Thirty-eight shorter pieces cover key crops of the region--from tobacco to Christmas trees--as well as issues of historic and emerging interest--from insects and insecticides to migrant labor. The section on industry and commerce contains 13 thematic entries in which contributors address topics such as the economic impact of military bases, resistance to industrialization, and black business. Thirty-six topical entries explore particular industries, such as textiles, timber, automobiles, and banking, as well as individuals--including Henry W. Grady and Sam M. Walton--whose ideas and enterprises have helped shape the modern South. 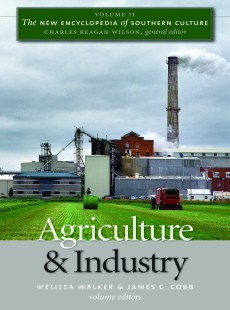