This volume of The New Encyclopedia of Southern Culture offers a current and authoritative reference to urbanization in the American South from the eighteenth century to the twenty-first, surveying important southern cities individually and examining the various issues that shape patterns of urbanization from a broad regional perspective.

Looking beyond the post-World War II era and the emergence of the Sunbelt economy to examine recent and contemporary developments, the 48 thematic essays consider the ongoing remarkable growth of southern urban centers, new immigration patterns (such as the influx of Latinos and the return-migration of many African Americans), booming regional entrepreneurial activities with global reach (such as the rise of the southern banking industry and companies such as CNN in Atlanta and FedEx in Memphis), and mounting challenges that result from these patterns (including population pressure and urban sprawl, aging and deteriorating infrastructure, gentrification, and state and local budget shortfalls). The 31 topical entries focus on individual cities and urban cultural elements, including Mardi Gras, Dollywood, and the 1996 Atlanta Olympics. 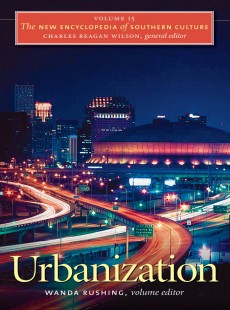