Since its original publication in 1975, The Old Dominion in the Seventeenth Century has become an important teaching tool and research volume. Warren Billings brings together more than 200 period documents, organized topically, with each chapter introduced by an interpretive essay. Topics include the settlement of Jamestown, the evolution of government and the structure of society, forced labor, the economy, Indian-Anglo relations, and Bacon's Rebellion. This revised, expanded, and updated edition adds approximately 30 additional documents, extending the chronological reach to 1700. Freshly rethought chapter introductions and suggested readings incorporate the vast scholarship of the past 30 years. New illustrations of seventeenth-century artifacts and buildings enrich the texts with recent archaeological findings. With these enhancements, and a full index, students, scholars, and those interested in early Virginia will find these documents even more enlightening. 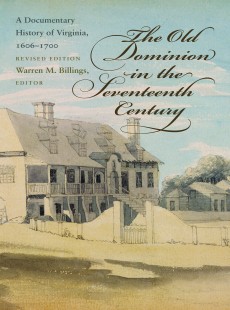 The Old Dominion in the Seventeenth Century