Tracing the deep roots of women's activism in America, Anne Boylan explores the flourishing of women's volunteer associations in the decades following the Revolution. She examines the entire spectrum of early nineteenth-century women's groups--Protestant, Catholic, and Jewish; African American and white; middle and working class--to illuminate the ways in which race, religion, and class could bring women together in pursuit of common goals or drive them apart.

Boylan interweaves analyses of more than seventy organizations in New York and Boston with the stories of the women who founded and led them. In so doing, she provides a new understanding of how these groups actually worked and how women's associations, especially those with evangelical Protestant leanings, helped define the gender system of the new republic. She also demonstrates as never before how women in leadership positions combined volunteer work with their family responsibilities, how they raised and invested the money their organizations needed, and how they gained and used political influence in an era when women's citizenship rights were tightly circumscribed. 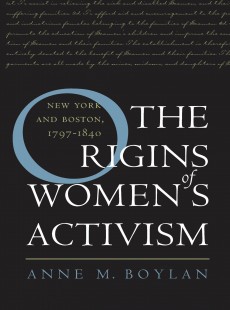 The Origins of Women's Activism