Fear of centralized authority is deeply rooted in American history. The struggle over the U.S. Constitution in 1788 pitted the Federalists, supporters of a stronger central government, against the Anti-Federalists, the champions of a more localist vision of politics. But, argues Saul Cornell, while the Federalists may have won the battle over ratification, it is the ideas of the Anti-Federalists that continue to define the soul of American politics.

While no Anti-Federalist party emerged after ratification, Anti-Federalism continued to help define the limits of legitimate dissent within the American constitutional tradition for decades. Anti-Federalist ideas also exerted an important influence on Jeffersonianism and Jacksonianism. Exploring the full range of Anti-Federalist thought, Cornell illustrates its continuing relevance in the politics of the early Republic.

A new look at the Anti-Federalists is particularly timely given the recent revival of interest in this once neglected group, notes Cornell. Now widely reprinted, Anti-Federalist writings are increasingly quoted by legal scholars and cited in Supreme Court decisions--clear proof that their authors are now counted among the ranks of America's founders. 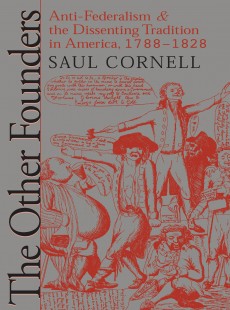 Anti-Federalism and the Dissenting Tradition in America, 1788-1828