Much of today's political rhetoric decries the welfare state and our maze of government regulations. Critics hark back to a time before the state intervened so directly in citizens' lives. In The People's Welfare, William Novak refutes this vision of a stateless past by documenting America's long history of government regulation in the areas of public safety, political economy, public property, morality, and public health. Challenging the myth of American individualism, Novak recovers a distinctive nineteenth-century commitment to shared obligations and public duties in a well-regulated society. Novak explores the by-laws, ordinances, statutes, and common law restrictions that regulated almost every aspect of America's society and economy, including fire regulations, inspection and licensing rules, fair marketplace laws, the moral policing of prostitution and drunkenness, and health and sanitary codes. Based on a reading of more than one thousand court cases in addition to the leading legal and political texts of the nineteenth century, The People's Welfare demonstrates the deep roots of regulation in America and offers a startling reinterpretation of the history of American governance. 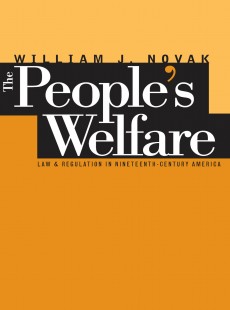 Law and Regulation in Nineteenth-Century America