In eighteenth-century America, fashion served as a site of contests over various forms of gendered power. Here, Kate Haulman explores how and why fashion--both as a concept and as the changing style of personal adornment--linked gender relations, social order, commerce, and political authority during a time when traditional hierarchies were in flux.

In the see-and-be-seen port cities of Boston, New York, Philadelphia, and Charleston, fashion, a form of power and distinction, was conceptually feminized yet pursued by both men and women across class ranks. Haulman shows that elite men and women in these cities relied on fashion to present their status but also attempted to undercut its ability to do so for others. Disdain for others' fashionability was a means of safeguarding social position in cities where the modes of dress were particularly fluid and a way to maintain gender hierarchy in a world in which women's power as consumers was expanding. Concerns over gendered power expressed through fashion in dress, Haulman reveals, shaped the revolutionary-era struggles of the 1760s and 1770s, influenced national political debates, and helped to secure the exclusions of the new political order. 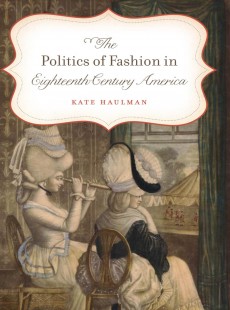 The Politics of Fashion in Eighteenth-Century America