The Richmond campaign of April-July 1862 ranks as one of the most important military operations of the first years of the American Civil War. Key political, diplomatic, social, and military issues were at stake as Robert E. Lee and George B. McClellan faced off on the peninsula between the York and James Rivers. The climactic clash came on June 26-July 1 in what became known as the Seven Days battles, when Lee, newly appointed as commander of the Confederate forces, aggressively attacked the Union army. Casualties for the entire campaign exceeded 50,000, more than 35,000 of whom fell during the Seven Days.

This book offers nine essays in which well-known Civil War historians explore questions regarding high command, strategy and tactics, the effects of the fighting upon politics and society both North and South, and the ways in which emancipation figured in the campaign. The authors have consulted previously untapped manuscript sources and reinterpreted more familiar evidence, sometimes focusing closely on the fighting around Richmond and sometimes looking more broadly at the background and consequences of the campaign. 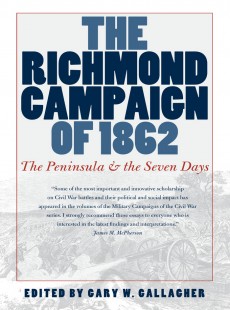 The Richmond Campaign of 1862

The Peninsula and the Seven Days