Since the sudden collapse of the communist system in Eastern Europe in 1989, scholars have tried to explain why the Soviet Union stood by and watched as its empire crumbled. The recent release of extensive archival documentation in Moscow and the appearance of an increasing number of Soviet political memoirs now offer a greater perspective on this historic process and permit a much deeper look into its causes.

The Rise and Fall of the Brezhnev Doctrine in Soviet Foreign Policy is a comprehensive study detailing the collapse of Soviet control in Eastern Europe between 1968 and 1989, focusing especially on the pivotal Solidarity uprisings in Poland. Based heavily on firsthand testimony and fresh archival findings, it constitutes a fundamental reassessment of Soviet foreign policy during this period. Perhaps most important, it offers a surprising account of how Soviet foreign policy initiatives in the late Brezhnev era defined the parameters of Mikhail Gorbachev's later position of laissez-faire toward Eastern Europe--a position that ultimately led to the downfall of socialist governments all over Europe. 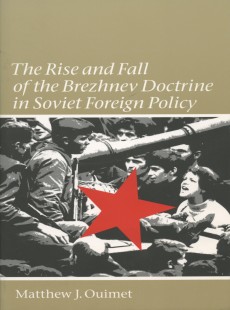