This Omnibus ebook contains the two-volume collection of essays, edited by Gary Gallagher, that covers the Shenandoah Valley Campaigns of 1862 and 1864.

This volume explores the Shenandoah Valley campaign, best known for its role in establishing Thomas J. "Stonewall" Jackson's reputation as the Confederacy's greatest military idol. The authors address questions of military leadership, strategy and tactics, the campaign's political and social impact, and the ways in which participants' memories of events differed from what is revealed in the historical sources. In the process, they offer valuable insights into one of the Confederacy's most famous generals, those who fought with him and against him, the campaign's larger importance in the context of the war, and the complex relationship between history and memory.

Generally regarded as the most important Civil War military operation conducted in the Shenandoah Valley of Virginia, the campaign of 1864 lasted more than four months and claimed more than 25,000 casualties. Beyond the loss of agricultural bounty to the Confederacy and the boost in Union morale a victory would bring, events in the Valley also would affect Abraham Lincoln's chances for reelection in the November 1864 presidential canvass.

The eleven original essays in this volume reexamine common assumptions about the campaign, its major figures, and its significance. Taking advantage of the most recent scholarship and a wide range of primary sources, contributors consider strategy and tactics, the performances of key commanders on each side, the campaign's political repercussions, and the experiences of civilians caught in the path of the armies. 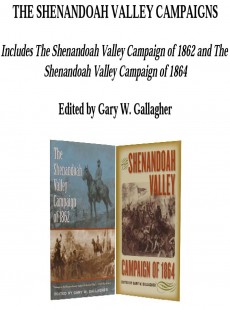