In a major revision of accepted wisdom, this book, originally published by UNC Press in 1991, demonstrates that American social Christianity played an important role in racial reform during the period between Emancipation and the civil rights movement.
As organizations created by the heirs of antislavery sentiment
foundered in the mid-1890s, Ralph Luker argues, a new generation of black and white reformers--many of them representatives of American social Christianity--explored a variety of solutions to the problem of racial
conflict. Some of them helped to organize the Federal Council of Churches in 1909, while others returned to abolitionist and home missionary strategies in organizing the NAACP in 1910 and the National Urban League in 1911. A half century later, such organizations formed the institutional core of America's civil rights movement. Luker also shows that the black prophets of social Christianity who espoused theological personalism created an influential tradition that eventually produced Martin Luther King Jr. 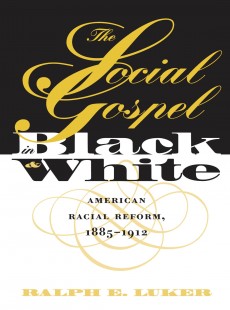 The Social Gospel in Black and White