In the immediate postwar period, as though sensing that the revulsion from Nazism might be carried too far, senators from the South defied the American Creed. They opposed the campaign to sign the Genocide Convention, for example, which the United Nations had adopted in 1948."

This article appears in the Fall 2012 issue of Southern Cultures. The full issue is also available as an ebook. 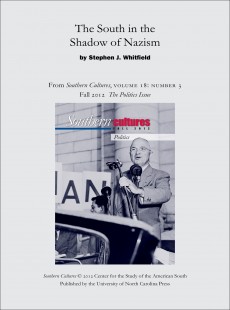 The South in the Shadow of Nazism

An article from Southern Cultures 18:3, Fall 2012: The Politics Issue