After the Civil War, a handful of former Confederate leaders joined forces with the Mexican emperor Maximilian von Hapsburg to colonize Mexico with former American slaveholders. Their plan was to develop commercial agriculture in the Mexican state of Coahuila under the guidance of former slaveholders with former slaves providing the bulk of the labor force. By developing these new centers of agricultural production and commercial exchange, the Mexican government hoped to open up new markets and, by extending the few already-existing railroads in the region, also spur further development.   The Southern Exodus to Mexico considers the experiences of both white southern elites and common white and black southern farmers and laborers who moved to Mexico during this period. Todd W. Wahlstrom examines in particular how the endemic warfare, raids, and violence along the borderlands of Texas and Coahuila affected the colonization effort. Ultimately, Native groups such as the Comanches, Kiowas, Apaches, and Kickapoos, along with local Mexicans, prevented southern colonies from taking hold in the region, where local tradition and careful balances of power negotiated over centuries held more sway than large nationalistic or economic forces. This study of the transcultural tensions and conflicts in this region provides new perspectives for the historical assessment of this period of Mexican and American history. 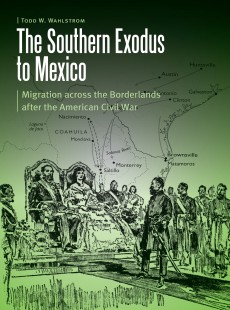 The Southern Exodus to Mexico

Migration across the Borderlands after the American Civil War