Over the past several decades, the Dominican Republic has
experienced striking political stagnation in spite of dramatic
socioeconomic transformations. In this work, Jonathan Hartlyn
offers a new explanation for the country's political evolution,
based on a broad comparative perspective.
Hartlyn rejects cultural explanations unduly focused on
legacies from the Spanish colonial era and structural
explanations excessively centered on the lack of national
autonomy. Instead, he highlights the independent impact of
political and institutional factors and historical legacies,
while also considering changes in Dominican society and the
influence of the United States and other international forces.
In particular, Hartlyn examines how the Dominican Republic's
tragic nineteenth-century history established a legacy of
neopatrimonialism, a form of rule that found extreme expression
in the brutal dictator Rafael Trujillo and has continued to shape
politics down to the present. By examining economic policymaking
and often conflictual elections, Hartlyn also analyzes the missed
opportunity for democracy during the rule of the Dominican
Revolutionary Party and the democratic tensions of the
administrations of Joaquin Balaguer. 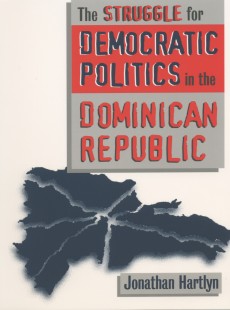 The Struggle for Democratic Politics in the Dominican Republic