Do we live in basically orderly societies that occasionally erupt into violent conflict, or do we fail to perceive the constancy of violence and disorder in our societies? In this classic book, originally published in 1980, Cedric J. Robinson contends that our perception of political order is an illusion, maintained in part by Western political and social theorists who depend on the idea of leadership as a basis for describing and prescribing social order.

Using a variety of critical approaches in his analysis, Robinson synthesizes elements of psychoanalysis, structuralism, Marxism, classical and neoclassical political philosophy, and cultural anthropology in order to argue that Western thought on leadership is mythological rather than rational. He then presents examples of historically developed "stateless" societies with social organizations that suggest conceptual alternatives to the ways political order has been conceived in the West. Examining Western thought from the vantage point of a people only marginally integrated into Western institutions and intellectual traditions, Robinson's perspective radically critiques fundamental ideas of leadership and order. 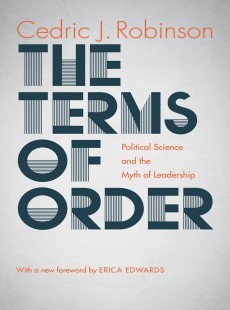 Political Science and the Myth of Leadership