Were movies in the East Bloc propaganda or carefully veiled dissent? In the first major study in English of East German film, Joshua Feinstein argues that the answer to this question is decidedly complex.

Drawing on newly opened archives as well as interviews with East German directors, actors, and state officials, Feinstein traces how the cinematic depiction of East Germany changed in response to national political developments and transnational cultural trends such as the spread of television and rock 'n' roll. Celluloid images fed a larger sense of East German identity, an identity that persists today, more than a decade after German reunification. But even as they attempted to satisfy calls for "authentic" images of the German Democratic Republic that would legitimize socialist rule, filmmakers challenged the regime's self-understanding. Beginning in the late 1960s, East German films dwelled increasingly on everyday life itself, no longer seeing it merely as a stage in the development toward communism. By presenting an image of a static rather than an evolving society, filmmakers helped transform East German identity from one based on a commitment to socialist progress to one that accepted the GDR as it was. 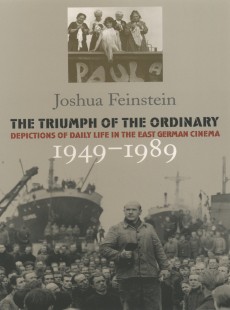 The Triumph of the Ordinary