"Grandchildren meet their grandparents at the end," Denise Low says, "as tragic figures. We remember their decline and deaths. . . . The story we see as grandchildren is like a garden covered by snow, just outlines visible." Low brings to light deeply held secrets of Native ancestry as she recovers the life story of her Kansas grandfather, Frank Bruner (1889–1963). She remembers her childhood in Kansas, where her grandparents remained at a distance, personally and physically, from their grandchildren, despite living only a few miles away. As an adult, she comes to understand her grandfather's Delaware (Lenape) legacy of persecution and heroic survival in the southern plains of the early 1900s, where the Ku Klux Klan attacked Native people along with other ethnic minorities. As a result of such experiences, the Bruner family fled to Kansas City and suppressed their non-European ancestry as completely as possible. As Low unravels this hidden family history of the Lenape diaspora, she discovers the lasting impact of trauma and substance abuse, the deep sense of loss and shame related to suppressed family emotions, and the power of collective memory. Low traveled extensively around Kansas, tracking family history until she understood her grandfather's political activism and his healing heritage of connections to the land. In this moving exploration of her grandfather's life, the former poet laureate of Kansas evokes the beauty of the Flint Hills grasslands, the hardships her grandfather endured, and the continued discovery of his teachings. 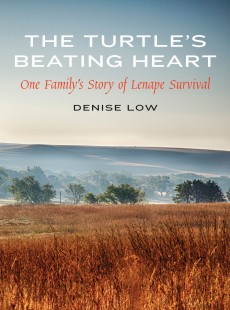 One Family's Story of Lenape Survival