Distinguished intellectual historian Paul Conkin offers the first comprehensive examination of mainline Protestantism in America, from its emergence in the colonial era to its rise to predominance in the early nineteenth century and the beginnings of its gradual decline in the years preceding the Civil War. He clarifies theological traditions and doctrinal arguments and includes substantive discussions of institutional development and of the order and content of worship. Conkin defines Reformed Christianity broadly, to encompass Presbyterians, Episcopalians, Congregationalists, Methodists, Calvinist Baptists, and all other denominations originating in the work of reformers other than Luther. He portrays growing unease and conflict within this center of American Protestantism before the Civil War as a result of doctrinal disputes (especially regarding salvation), scholarly and scientific challenges to evangelical Christianity, differences in institutional practices, and sectional disagreements related to the issue of slavery. Conkin grounds his study in a broad history of Western Christianity, and he integrates the South into his discussion, thereby offering a truly national perspective on the history of the Reformed tradition in America. 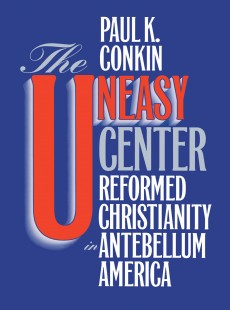