Egypt figured prominently in United States policy in the Middle East after World War II because of its strategic, political, and economic importance. Peter Hahn explores the triangular relationship between the United States, Great Britain, and Egypt in order to analyze the justifications and implications of American policy in the region and within the context of a broader Cold War strategy.

This work is the first comprehensive scholarly account of relations between those countries during this period. Hahn shows how the United States sought to establish stability in Egypt and the Middle East to preserve Western interests, deny the resources of the region to the Soviet Union, and prevent the outbreak of war. He demonstrates that American officials' desire to recognize Egyptian nationalistic aspirations was constrained by their strategic imperatives in the Middle East and by the demands of the Anglo-American alliance.

Using many recently declassified American and British political and military documents, Hahn offers a comprehensive view of the intricacies of alliance diplomacy and multilateral relations. He sketches the United States' growing involvement in Egyptian affairs and its accumulation of commitments to Middle East security and stability and shows that these events paralleled the decline of British influence in the region.

Hahn identifies the individuals and agencies that formulated American policy toward Egypt and discusses the influence of domestic and international issues on the direction of policy. He also explains and analyzes the tactics devised by American officials to advance their interests in Egypt, judging their soundness and success. 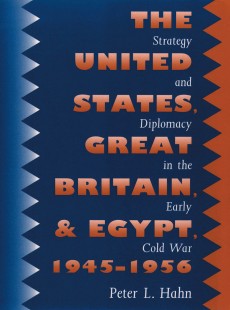 Strategy and Diplomacy in the Early Cold War