The Clinton administration's failed health care reform was not the first attempt to establish government-sponsored medical coverage in the United States. From 1915 to 1920, Progressive reformers led a spirited but ultimately unsuccessful crusade for compulsory health insurance in New York State. Beatrix Hoffman argues that this first health insurance campaign was a crucial moment in the creation of the American welfare state and health care system. Its defeat, she says, gave rise to an uneven and inegalitarian system of medical coverage and helped shape the limits of American social policy for the rest of the century.

Hoffman examines each of the major combatants in the battle over compulsory health insurance. While physicians, employers, the insurance industry, and conservative politicians forged a uniquely powerful coalition in opposition to health insurance proposals, she shows, reformers' potential allies within women's organizations and the labor movement were bitterly divided. Against the backdrop of World War I and the Red Scare, opponents of reform denounced government-sponsored health insurance as "un-American" and, in the process, helped fashion a political culture that resists proposals for universal health care and a comprehensive welfare state even today. 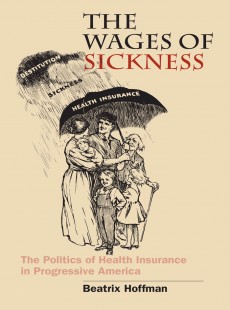 The Wages of Sickness

The Politics of Health Insurance in Progressive America