How did Civil War soldiers endure the brutal and unpredictable existence of army life during the conflict? This question is at the heart of Peter S. Carmichael's sweeping new study of men at war. Based on close examination of the letters and records left behind by individual soldiers from both the North and the South, Carmichael explores the totality of the Civil War experience--the marching, the fighting, the boredom, the idealism, the exhaustion, the punishments, and the frustrations of being away from families who often faced their own dire circumstances. Carmichael focuses not on what soldiers thought but rather how they thought. In doing so, he reveals how, to the shock of most men, well-established notions of duty or disobedience, morality or immorality, loyalty or disloyalty, and bravery or cowardice were blurred by war.

Digging deeply into his soldiers' writing, Carmichael resists the idea that there was "a common soldier" but looks into their own words to find common threads in soldiers' experiences and ways of understanding what was happening around them. In the end, he argues that a pragmatic philosophy of soldiering emerged, guiding members of the rank and file as they struggled to live with the contradictory elements of their violent and volatile world. Soldiering in the Civil War, as Carmichael argues, was never a state of being but a process of becoming. 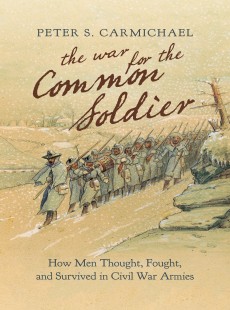 The War for the Common Soldier

How Men Thought, Fought, and Survived in Civil War Armies