The Winning Ticket is an inside look at one of the most complicated yet seat-of-your-pants financial investigations and prosecutions in recent history. Rob Sand, the youngest attorney in his office, was assigned a new case by his boss, who was days away from retirement. Inside the thin accordion binder Sand received was meager evidence that had been gathered over the course of two years by Iowa authorities regarding a suspicious lottery ticket. No one expected the case to go anywhere. No dead body, no shots fired, and no money paid out. Why should they care? There was no certainty that a crime had even been committed. But a mysterious Belizean trust had attempted to claim the $16 million ticket, then decided to forgo the money and maintain anonymity when the State of Iowa demanded to know who had purchased the ticket. Who values anonymity over that much money? Both a story of small-town America and a true-crime saga about the largest lottery-rigging scheme in American history, The Winning Ticket follows the investigation all the way down the rabbit hole to uncover how Eddie Tipton was able to cheat the system to win jackpots over $16 million and go more than a decade without being caught until Sand inherited the case. Just as remarkable as the crime are the real-life characters met along the way: an honest fireworks salesman, a hoodwinked FBI agent, a crooked Texas lawman, a shady attorney representing a Belizean trust, and, yes, Bigfoot hunters. While some of the characters are nearly unbelievable, the everyday themes of integrity and hard work resonate throughout the saga. As the case builds toward a reckoning, The Winning Ticket demonstrates how a new day has dawned in prosecuting complex technological crimes. 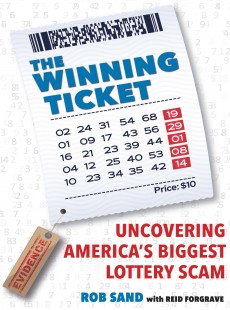