In the years after the Civil War, black and white Union soldiers who survived the horrific struggle joined the Grand Army of the Republic (GAR)--the Union army's largest veterans' organization. In this thoroughly researched and groundbreaking study, Barbara Gannon chronicles black and white veterans' efforts to create and sustain the nation's first interracial organization.

According to the conventional view, the freedoms and interests of African American veterans were not defended by white Union veterans after the war, despite the shared tradition of sacrifice among both black and white soldiers. In The Won Cause, however, Gannon challenges this scholarship, arguing that although black veterans still suffered under the contemporary racial mores, the GAR honored its black members in many instances and ascribed them a greater equality than previous studies have shown. Using evidence of integrated posts and veterans' thoughts on their comradeship and the cause, Gannon reveals that white veterans embraced black veterans because their membership in the GAR demonstrated that their wartime suffering created a transcendent bond--comradeship--that overcame even the most pernicious social barrier--race-based separation. By upholding a more inclusive memory of a war fought for liberty as well as union, the GAR's "Won Cause" challenged the Lost Cause version of Civil War memory. 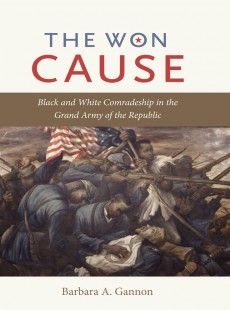 Black and White Comradeship in the Grand Army of the Republic