Even after Lee surrendered to Grant at Appomattox, the Civil War continued to be fought, and surrenders negotiated, on different fronts. The most notable of these occurred at Bennett Place, near Durham, North Carolina, when Confederate General Joseph E. Johnston surrendered the Army of Tennessee to Union General William T. Sherman. In this first full-length examination of the end of the war in North Carolina, Mark Bradley traces the campaign leading up to Bennett Place.

Alternating between Union and Confederate points of view and drawing on his readings of primary sources, including numerous eyewitness accounts and the final muster rolls of the Army of Tennessee, Bradley depicts the action as it was experienced by the troops and the civilians in their path. He offers new information about the morale of the Army of Tennessee during its final confrontation with Sherman's much larger Union army. And he advances a fresh interpretation of Sherman's and Johnston's roles in the final negotiations for the surrender. 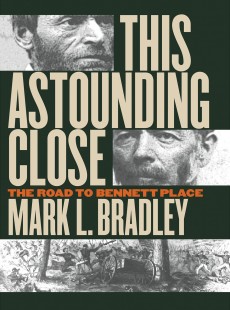 The Road to Bennett Place